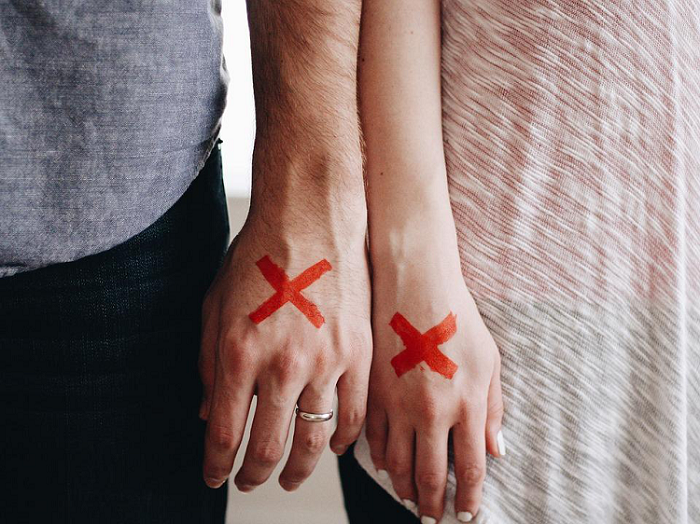 Most married couples sweep their problems under the rug despite being in a distressed relationship, until it is too late. Marital troubles don’t occur overnight. No couple enters matrimony expecting a divorce.

Reality check: Marital problems are bound to happen in every marriage.

Every married couple has to deal with their own set of problems. However, happily married couples don’t let these problems end their marriage. Rather, they turn their problems into opportunities to understand each other better and strengthen their relationship.

Here are five expert-backed marital problems that are warning signs of an impending divorce.

After studying 30,000 couples for 40 years, relationship and marriage expert, John M. Gottman concluded that 69% of conflicts in a marriage are never solved. This means couples fight over the same issues over and over again.

If you don’t understand each other’s point of view and are filled with contempt at the end of the fight, consider it a red flag. Apart from this, you should be wary if your arguments grow in intensity over time, and often escalate into verbal or physical abuse.

For example, according to several relationship experts, money is one of the top reasons why couples fight. If one spouse overspends or takes on debt without discussing with his/her partner, it can put stress on the marriage. To keep money from becoming the cause of your arguments, set a few ground rules for managing your finances and exercise them when making any money-related decision.

Advice: When you feel your conversation is turning into a heated argument, take a small break and reconnect on the topic only when you are calmer. Both of you should let down your defenses and take ownership of your mistakes if you want to avoid serious arguments.

2) You Don’t Want to Spend Time with Each Other

Another sign of trouble is when everything, from kids and work to friends and social media, seems to be more important to you (or your spouse) than spending time together. In a relationship, one person will always want to spend more time together than the other. When this happens, the emotional connection suffers. Couples who don’t find enough time to connect with each other may feel that their relationship has become transactional and they are living separate lives.

Advice: Prioritise what is truly important for your marriage. Be aware of what is happening in your partner’s life and be responsive to it. You don’t want your marriage to end because you were too busy with other things in your life.

Sex and money rank as the top two reasons why couples fight. According to a study, most married couples have sex only five times in a month and 12% of married people say that they haven’t had sex for at least three months.

One spouse may have a higher sex drive than the other, but when the latter rejects the partner’s sexual advances without caring about their feelings, it becomes a problem. When this happens, the other person starts feeling hurt, rejected, emotionally disconnected, and angry. This can have a multitude of consequences:

Advice: If one of you feels unsatisfied with your sex life, try to examine the reason behind it and discuss with your partner what can be done to reignite the lost passion.

4) You Can’t Emotionally Connect with Each Other

Resentment and contempt start taking the place of love and patience as a marriage fails. You may start feeling happier when you are not together. Spouses stuck in a bad marriage start spending more time at work or with friends and stop sharing their problems with each other.

Sometimes, it gets to the point where spouses stop talking to each other without being affected. Alternatively, one person cares and gets angry about it, but the other person doesn’t want to deal with it. This is called “stonewalling,” where one partner turns their back to the other and displays no empathy for them.

Advice: Love is cultivated mostly in seemingly meaningless moments of everyday life. According to Dr. Gottman, every time you and your partner show love and care for each other in the small moments, you make a deposit into your “Emotional Bank Account.” The more savings you make, the easier it gets for you to deal with troubles in the hard times of your marriage.

5) Either (Or Both) of You Is Contemplating an Affair

According to statistics from Trustify, one or both partners admit to cheating in over 1/3rd of marriages. The reasons for extramarital affairs can be –

Often, the by-products of such affairs are lies, deceit, ignorance, guilt, and shame that ultimately lead to divorce. A marriage in which there is no trust and suspicions run high is bound to fail.

Advice: The stigma associated with infidelity can make it difficult to make a decision about your marriage. Take your time to understand what you want. If you want to stay in the marriage, you and your partner should leave the baggage of the affair behind and move on. Both of you should understand the factors that made either of you cheat and work on these factors to start afresh.

If you want to leave the marriage, don’t carry feelings of victimization and guilt with you. Find your happy spot and move on. Talk to a local family lawyer about the way ahead. If you live in Geneva, New York, consult an experienced Geneva divorce lawyer who can tell you about the divorce laws applicable in your state.

Is Divorce the Solution?

Before making any decision, it is important to consider the practical aspects and implications of divorce. This doesn’t mean you have to stay in a toxic marriage just because you think life after divorce is going to be difficult.

Consider therapy and marriage counseling before making the decision to divorce. For these to be effective, both partners should have the intention of making the marriage work. It’s about putting your marriage above your ego.

If you are willing to do so, you can resolve all your marital issues and make way for a happy marriage.

If you feel your marriage is doomed by any of the above five signs, don’t wait for the situation to get worse. It will not get better on its own. Most of these issues can be resolved if both partners are willing to work on them. Seek professional help before your marriage gets damaged beyond repair.